Around Metropolis in 80 Seconds

Around Metropolis in 80 Seconds is the seventh webisode of season 3.

The next scene has Frost suggesting a old school street race around Metropolis between Wonder Woman and Supergirl without using their superpowers. Supergirl seems to be on board and hops into her large go-cart. The Flash asks Wonder Woman where her bike was but he trips over it due to it being invisible. Batgirl thanks her dad for shutting down the route for the race with her dad replying back he was happy to help as long as Batgirl keeps her promise to not ever drive over the speed limit.

Soon as Frost was about the start the race, Harley arrives in her jeep and says nobody starts the race without Harley Quinn! After Frost waves the flag to start the race, all three girls take off. Next shows Wonder Woman and Supergirl driving side-by-side but Supergirl is alarmed by the approach of a building up ahead. Without luck, Supergirl crashes her vehicle into some garbage cans while Wonder Woman simply avoids and drives past.

Next shows Harley driving down the street but gets stuck in traffic but uses her vehicle's unique ability to heighen itself, she gently drives over the car ahead. Next scene cuts to Steve Trevor sweeping the outdoor pavement of Capes and Crowls Cafe and Wonder Woman speeding past by him. Steve, in abolute admiration, comments how she "blows him away". Next, shows Wonder Woman and Supergirl driving by each other and they catch The Double Dare Twins robbing the local bank. Wonder Woman says she'll catch them but Supergirl snaps back and says she will.

As Wonder Woman and Supergirl chases the twins down, Harley comes to a holt due to a sign on the road but Harley pushes her button in her vehicle to destroy it and drives on ahead. Back with Wonder Woman and Supergirl, they seem to have chased the twins in a small lonely dusty area of the city but they were nowhere in sight. Wonder Woman asks where they have went and Supergirl uses her x-ray vision to spot them inside a large truck. Supergirl says she got them but Wonder Woman says she's already on it. Both girls manged to catch the twins and both girls fist bumped in victory but quickly become competitive once again, both still determined to win the race. 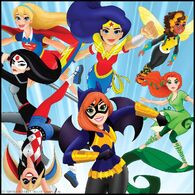 Retrieved from "https://dcsuperherogirls.fandom.com/wiki/Around_Metropolis_in_80_Seconds?oldid=46041"
Community content is available under CC-BY-SA unless otherwise noted.