Being Batman, The Spotlight, Alfred

As Bruce Wayne, he is self-obsessed, sassy and enjoys the spotlight, but he can be a jerk to Grayson

Bruce's normal outfit consists of a sleeved shirt with sunglasses hanging, black pants, and shoes. His hairstyle is suppose to be based of Robert Pattinson

His Batman outfit was inspired by Batman: The Animated Series  with his signature pose on the rooftop.

Batgirl first mentions Batman in the episode Sweet Justice when Wonder Woman questions her about her skills. Batman's likeness is seen several times throughout the episode in Babs's room and in her section of the underground base. Batman is more prominently featured in the episode From Bat to Worse, both in Babs's memories from Gotham about trying to meet Batman, and in two phone calls to Commissioner Gordon. Bruce Wayne licenses the Batman alter-ego in an episode of the series. 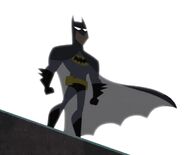 Add a photo to this gallery
Retrieved from "https://dcsuperherogirls.fandom.com/wiki/Batman_(G2)?oldid=47368"
Community content is available under CC-BY-SA unless otherwise noted.