Beast Boy is a supporting character in the DC Super Hero Girls (web series). He is a student at Super Hero High School.

Beast Boy isn’t out to prove how big and strong he is. He loves to live just for the fun of it.

Beast Boy being a shape-shifter, he has green skin, green eyes, dark green hair and pointed ears. He also has pointed fangs on his lower set of teeth. He wears a black turtle-necked jacket with a large purple stripe going down it and wears a light gray t-shirt underneath with a circular shape design that has a symbol of a human hand with a animal paw print on it. He also wears black pants with a thick purple stripe going down the side of each pant leg and he wears purple and white high tops. 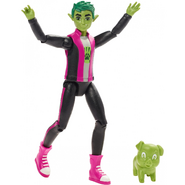 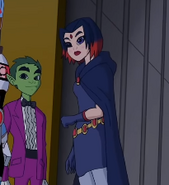 Retrieved from "https://dcsuperherogirls.fandom.com/wiki/Beast_Boy?oldid=29905"
Community content is available under CC-BY-SA unless otherwise noted.