DC Super Hero Girls Wikia
Register
Don't have an account?
Sign In
Advertisement
in: A to Z, Characters, Female Characters,
and 5 more

Catwoman, also known by the nickname "Cat" or her real name Selina Kyle, is a supporting character in the first generation of the DC Super Hero Girls franchise. She is a kleptomaniacal student at Super Hero High School.

Catwoman is one feisty feline! Growing up an orphan in Gotham City, she learned that the only person she could count on was herself. Leave it to the girls at Super Hero High to change that.

Catwoman is a tomboy with green eyes, short black and purple hair in a side ponytail, night vision glasses, and light colored skin. She mainly wears a black top, jacket, cat belt, black and purple boots, and clawed leather gloves, as well as some black cat ears on top of her head. Her main weapon is a whip called the Cat of Nine Tails. 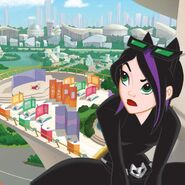 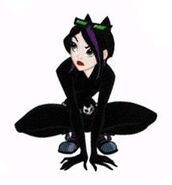 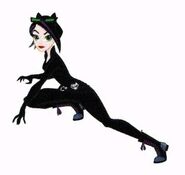 An early character design of Catwoman.