DC Super Hero Girls Wikia
Register
Don't have an account?
Sign In
Advertisement
in: A to Z, Cartoon

112 + 1 TV special + 3 movies
DC Super Hero Girls is a series of short animated webisodes that are released on the franchise's official website and on their YouTube channel. Each webisode focuses on the social lives of the main characters and how they handle their powers around school. The series is developed by Warner Bros Animation and DC Comics and is used as a way to help the franchise introduce it's characters to newer fans. It also included one TV special and three movies.

The intro only contains one video. 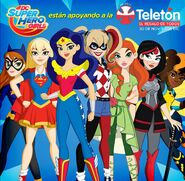