DC Super Hero Girls Wikia
Register
Don't have an account?
Sign In
Advertisement
in: A to Z, Cartoon, Specials,
and 3 more

Wonder Woman, Supergirl, Batgirl, Poison Ivy, Harley Quinn, Bumblebee and Katana square off against Korugar Academy in the Intergalactic Games but trouble is in the air as Lena Luthor takes advantage of the gathering of the Supers to enact her villainous plan. It's up to the DC Super Hero Girls to fight the forces of evil and protect their school. With Wonder Woman's strength, Supergirl's speed, Batgirl's strategic knowledge, Poison Ivy's ability to make things grow, Harley Quinn's energy, Bumblebee's ability to shrink and Katana's fearless personality... anything is possible.

The DVD features an array of special features, such as Fifth Harmony's "That's My Girl" music video and seven webisodes from the second season from the animated webseries. 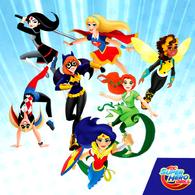