The following is a list of goofs, errors, and mistakes in the series DC Super Hero Girls and Super Shorts.

Back In a Flash

The Bird and the Bee

The Fresh Princess of Ren Faire

The Warrior and the Jester

In numerous scenes throughout the episode, Harleen's boots seems to switch colors.

The Slow And The Furious

Just like any other episode from the show, this crossover displays its loose continuity among all the characters, events, places, etc.

Did Babs lose both toes in the Water?

When did Babs turned into Batgirl so fast and where's Powergirl's cape?

Did she grow an extra toe when she get older?

How can she pay for a comic in the past if she doesn't have an account?

Does Babs have the same socks with different style? 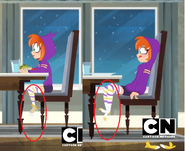 Isn't she too short for her feet to touch the ground?

Did she walk through an invincible wall??

I have no idea why Drury Walker was a female.

When did Diana get her Allergy Shot?

Apart from being magic, Is Zee part ghost?

When did Karen had time to remove her Highlight?

Was there two title created? 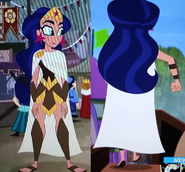 When did she change her footwear

Does Harley even know what kind of Boots she want to wear?

When did Harley switch tights?

As an Alien; Does Kara's big toe has a mind of it's own?

Since when is the Break on the left?

Can Karen's highlight move on it own?

If she can perform magic; Why does she need Babs for this simple trick?

Boots in the Wrong Feet 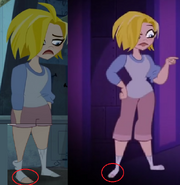 Did she get new socks that only has one hole?

Wonder Woman hand is on something