Mera (aka Water Girl) is a recurring character in the first generation of the DC Super Hero Girls franchise who debuts in season 4. She is a student at Super Hero High School.

Mera is a teenage girl with long red wavy hair. She has peach skin and green eyes. She wears a green leotard suit with fish scales all over it with golden spaghetti straps and has a golden seashell on the center of the chest area of it. She also wears a golden belt with an "M" on it, a golden tiara on her head, and also wears thick golden bracelets on both of her arms, as well as gold boots.

She has a giant pet seahorse named Storm and is friends with Miss Martian.

Depiction in the web series

She is voiced by Erica Lindbeck in the English version of the webseries.

In Fish Out of Water Part 1, Mera struggles to adjust to life at Super Hero High on her first day, in which she accidentally destroys the gym with her powers during her first-day evaluation for physical education, takes an abnormally long time using the water fountain to the anger of other students, and her efforts to stop Mrs. Clayface stealing purses in the park backfire when she splashes her with water, only to allow her to grow in size, overpower the other students and get away. Although Wonder Woman, the ambassador to new students, tells her she will get better, she later confides to Storm at the docks that she may never fit in, and sees Firefly chase Miss Martian, intending to use her powers for nefarious purposes, and runs to help her. In Fish Out of Water Part 2, she distracts Firefly as Miss Martian tries to escape and they engage in a battle. As Firefly corners her, Mera defeats him by using water from the docks to blast him through shipping containers. Wonder Woman organizes a surprise pool party in her room to thank her for saving Miss Martian.

In Ha-Ha Horticulture, Mera appears as a background character sleeping outside the school after Poison Ivy's sleeping poppy experiment puts her and most of the other SHHS students and staff to sleep. She later appears waking up when Ivy and Harley Quinn distribute pollen around the school to undo the effects of the experiment.

In Missing Martian, Mera makes a background appearance talking to Animal Man in the school foyer.

In Water Water Nowhere, she sleeps in and misses a field trip to the amusement park when her friends believe she tricked them into waking her up to get a better seat on the bus. Alone in the school, she encounters Killer Croc trying to steal an art sculpture on loan from the art museum. She takes the key to the statue's super-proof chains before he chases after her. Powerless to fight back due to Croc disabling the water in the school, she gets chased by him all over the school before running into Poison Ivy's greenhouse where she uses water from inside a cactus to defeat him. As her friends return, she tells them that the cactus is her "new, green friend".

In the first part of Fortress of Solidarity, she skates around the tree during the SHHS winter holiday tree ceremony and uses her powers to use the ice from the skating ring to put out the fire when Trigon sets the tree on fire. In the second part, she, Batgirl, Frost and Wonder Woman travel to the arctic to save Supergirl as she is attacked by Captain Cold. They battle him, with Mera sending his freeze blasts back at him due to her power to control water even when frozen. He flees and gets cornered by the shoreline where he holds a polar bear hostage. He is defeated when Mera splashes him with water from the shore from behind and Frost freezes him inside. Later, Supergirl's crystal creates a fortress of solidarity and she proclaims that the fortress is for all of them and they have a group hug.

In the first part of My So-Called Anti-Life, Harley Quinn mentions to Supergirl and Bumblebee about pulling a prank on Mera by filling her swimming pool with a substance, but she is interrupted by Supergirl before she can say what it is. 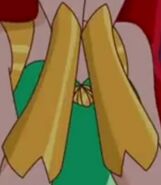