DC Super Hero Girls Wikia
Register
Don't have an account?
Sign In
Advertisement
in: Article stubs, A to Z, Locations,
and 3 more

Sweet Justice
Metropolis High School (also simply known as Metropolis High and abbreviated as MHS) is one of the main locations in the second generation of the DC Super Hero Girls franchise. It is a high school located in the city of Metropolis, and it made its debut in "Sweet Justice".

The following students are noted from the yearbook during the intro, and from the TV series, Super Shorts and graphic novels.

Other DC Characters (Hero or Villain or other) 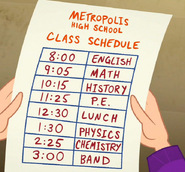