Miss Martian first appeared in the season 1 webisode Welcome to Super Hero High. She is voiced by Cristina Pucelli in the English version of the cartoon.

In Fall Into Super Hero High, she appears in Harley Quinn's video opening the door that Cheetah runs into as she is being chased by Hawkgirl.[3] In Hero of the Month: Poison Ivy, she makes a background appearance in a lecture hall watching Poison Ivy's announcement as Hero of the Month.

In Clubbing, she appears as a member of the United Planets Club at the SHHS clubs fair, presumably representing Mars and turns invisible when Poison Ivy greets them. After Starfire reminds her that Waller won't sign off on her extracurricular hours if she is invisible, she turns visible again behind her. [4]

In New Beginnings, Miss Martian appears at the surprise party for Wonder Woman for defeating her first supervillain.[6]

In Franken-Ivy, Miss Martian makes a background appearance talking to Lady Shiva in a school hallway.[9] In Hero of the Month: Frost, Miss Martian watches Frost's Hero of the Month announcement in a room with other students sitting at a table with Frost and Catwoman and witnesses as the former freezes the latter's hand when she congratulates her by giving a high-fives her.[10]

In Ultimate Accessory, Miss Martian appears in Weaponomics class during the instructions for the mid term accessory project. She, Katana and Harley Quinn help Bumblebee demonstrate her accessories for the grading while using them to successfully defeat King Shark at the docks, with Miss Martian using the Heat Vision-enhancing glasses.[12]

In Roomies Return: Frost's Bite, she appears as one of Frost's roommates along with Star Sapphire and Lady Shiva. During breakfast, she turns invisible when Frost gets angry when Star Sapphire finishes their hot tea. She later offers to use the showers instead of Frost after Star Sapphire tells them that she used all the hot water, and turns invisible again after Frost storms off. When she and the other students accidentally destroy Frost's heater when responding to a Save the Day alarm, Frost freezes them. Later, her roommates guile her to use her mind-reading powers to inquire why Frost has been acting so grumpily. She learns that Frost needs heat to recharge her powers, and has been frustrated by her roommates' inconsiderateness. Miss Martian then uses her heat vision to melt ice to create a steam room effect for Frost in their dorm. In Cold Blooded, makes a cameo appearance watching Ivy's dancing flowers show at a fountain outside the school. She later appears walking outside the school.

In Surprise!, Miss Martian makes a cameo appearance standing with Starfire by the fountain in front of the school.

In Fresh Ares Part 2, she accompanies Wonder Woman and the other flying students responding to a Save the Day alarm and participates in the battle against Ares as he rampages through Metropolis. After Ares is subdued, she appears in front of him with the other celebrating students. In Fresh Ares Part 3, after Ares breaks free and continues his rampage, Miss Marian offers to help Batgirl and the Flash find Ares' Amulet of Harmonia to stop his rampage. She uses her psionic powers to find it in Catwoman's vault. Upon arriving to the vault in the Battywagon, she uses her shapeshifting abilities to transform into Catwoman to open the vault's visual scanner. They return to Metropolis with the Amulet, and after it is returned to Ares, ending his rampage, Batgirl asks her about her other powers.

In Gorilla Warfare, she makes a background appearance by the Lady Justice statue outside the school and turns invisible upon hearing Vice Principal Grodd's echo. In It's a Superful Life, she makes a cameo appearance flying through the SHHS foyer during the school's winter holiday tree ceremony with Mary Marvel.

In Fish Out of Water Part 1, Miss Martian makes a cameo appearance in a line of waiting students for a water fountain in the school hallway as Mera uses it for a long time. Later, she gets chased by Firefly at the docks, who intends to use her powers for nefarious purposes. Mera then comes to save her. In Fish Out of Water Part 2, Miss Martian turns invisible when Firefly attacks them and helps save dock workers from the fires created by Firefly while Mera distracts him. As Firefly corners her, Mera defeats him by blasting him with water from the bay. Back at the school, Miss Martian asks Wonder Woman to help her thank Mera for saving her. Miss Marian later leads Mera to a surprise pool party in her dorm organized by Wonder Woman.

In Ha-Ha Horticulture, Miss Martian makes a background appearance flying over the school and later appears running from the explosion of pollen outside the school caused by Poison Ivy's sleeping poppy experiment, causing her to collapse sleeping along with most of the rest of the school. Later, Miss Marian appears as Ivy and Harley distribute pollen across the school to undo the effects of the poppy.

In Tamaranean Dance Club Part 1, she appears attending the Tamaranean dance in the SHHS foyer organized for Starfire is the students from Korugar Academy arrive. She does not appear in the second part, when the dance turns into a battle between the SHHS and Korugar students as "dance" is Tamaranean for "domination battle". In By the Yearbook, she makes a background appearance looking at a completed SHHS yearbook with Bunker in a school hallway.

In Stage Fright, she appears as the stage manager for her friends' school production of Midsummer Night's Dream. When her friends get stuck to the floor just before the play when Raven's good luck spell backfires, she confronts her stage fright to play all the parts using her shapeshifting powers, while her friends help from the backstage. After the play ends successfully, her friends congratulate her during the curtain call, but she turns invisible and leaves the school, before flying towards the moon and disappearing again.

In Anti Hall Monitor Part 2, she appears as one of the many students trapped inside a super power-proof room by the monster created by Batgirl's Anti-Hall Monitor app. After Hawgirl defeats the monster, she and the other trapped students are teleported back into the school foyer. In Rolling Blunder, she makes a cameo appearance sitting on the bleachers in the school gymnasium putting an ice pack on her knee, along with other students presumably recovering from injuries sustained while participating in Super Hero High's Savage Supers roller derby team.

In Mindscape, she convinces Bumblebee to rest after staying awake past midnight doing an extra credit problem for math club. The next morning, she finds her unconscious and unresponsive, and Raven sends her into Bumblebee's dream to wake her. In her dream, she battles a pair of sinister red eyes and after defeating it, saves Bumblebee from a collapsing floor. She succeeds and Bumblebee wakes up and they both return unharmed.

In Missing Martian, she is given an exploding cupcake by Harley Quinn for her birthday, who reveals that she told Vice Principal Grodd who announces it on the loudspeaker, much to her dismay as she dislikes being the center of attention. Later in the cafeteria, she overhears Katana, Wonder Woman and Supergirl discuss a plot involving poisonous gas. Later that night, she follows them to a park and confronts them, who reveal to have led her to a surprise birthday party, knowing that she would never agree to one and that she was eavesdropping. She thanks them, but turns invisible when Harley mentions karaoke.

In Super Gift Swap, she participates in Super Hero High's annual gift exchange. As the last name called, she steals Hawkgirl's gift to avoid taking Harley Quinn's remaining ticking gift. After the swap, she ends up with the gift she initially stole from Hawkgirl. In the second part of My So-Called Anti-Life, she makes a cameo appearance running for cover as Darkseid uses the anti-life equation to corrupt the school's amethyst and remake the world in his image. In the third part, she is revealed to have been turned into a clone of Darkseid along with most of the rest of the students and staff through the effects of the equation and is turned back when the remaining students undo it. As Darkseid is defeated, she appears with the other students approaching him. 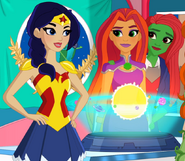