Poison Ivy, aka Pamela Lillian Isley, is a main character in the DC Super Hero Girls web series. She is a student at Super Hero High School.

When a botched lab experiment gave this wallflower the ability to control plants, her life changed forever. Now, she’s finally blossoming into her new life, and doing the best she can to adapt to her amazing new super powers.

When she's not outdoors, Poison Ivy is planted in her lab. That's where she figured out how to make plants grow from acorn to giant oak in the blink of an eye.

Watch out! Poison Ivy’s green thumb has a thorny side. Sure, she makes the plants do her bidding, but she also nurtures them, which helps her stay connected to them.

If you don't think plants have feelings, you need to wake up and smell the roses. Poison Ivy treats all the plants as equals, and will do whatever it takes to protect them.

Poison Ivy has pale skin, long ginger hair that goes down to her waist, and has vines tying one strand of hair in a braid. She wears a green dress with a green belt made out of a vine with a rose attached and her dark green leggings. The vines around her waist connect to the one curling around her legs and she also wears green flat styled shoes.

Poison Ivy is a kind person. In contrast with her DC Comics counterpart, she is hero and cooperates with another heroes like Wonder Woman or Batgirl. 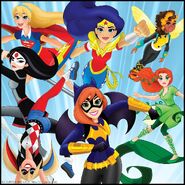 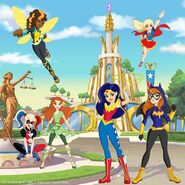 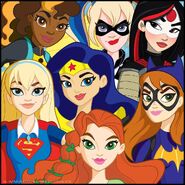 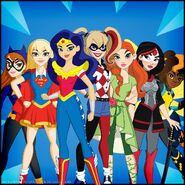 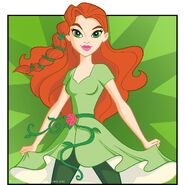 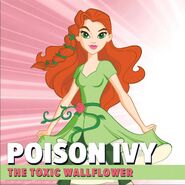 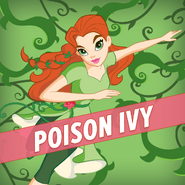 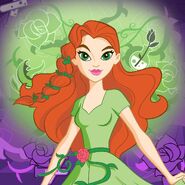 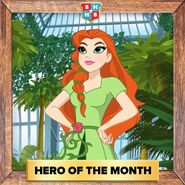 Retrieved from "https://dcsuperherogirls.fandom.com/wiki/Poison_Ivy_(G1)?oldid=44219"
Community content is available under CC-BY-SA unless otherwise noted.