DC Super Hero Girls Wikia
Register
Don't have an account?
Sign In
Advertisement
in: A to Z, Characters, Teenagers,
and 3 more

Mammoth
Star Sapphire
Cheetah
Ravager, whose real name is Rose Wilson, is a character in the first generation of the DC Super Hero Girls franchise. She is a prideful actress and a student at Super Hero High School.

Ravager has white skin and long white hair and wears red lipstick. She wears a mask that is one side orange and the other side blue that covers half her face. She wears a blue jumpsuit with a belt that has a buckle that resembles her father's face. She also wears orange gloves and matching orange knee-length boots as well as wearing golden brass bracelets on both arms.

Although Ravager never made any main and/or speaking appearances in the webseries, she occasionally made small cameos.

In Hits and Myths, Ravager first appears in Wonder Woman's dream as they Cyclops as Professor Etrigan summarizes the Odyssey. She later appears herself rehearsing lines with Star Sapphire and Mammoth in the school theater department. When Sapphire complains about how Ravenger always gets to play the Queen, Ravager responds that it is because of her seniority and talent. When they are disturbed by members of the Junior Detectives Society, she and her friends attack them for violating "the sacred space of the theater", encouraging her friends to act. She battles Batgirl, and after she and her friends capture the trespassers, Batgirl and hawkgirl explain that they were merely investigating the stolen wigs from the theater department. Ravager denies having a wig stolen under her watch as the costume room is always locked and she is one of only three people with keys to it. When she shows them the closet, she is shocked to find it ransacked. Batgirl then asks Ravager who has the other two keys to the costume closet, and she responds that they belong to Professor Etrigan and Principal Waller.

In Summer Olympus, Ravager appears attending Metropolis Theatre Camp hosted by Professor Etrigan, where she thanks him as he tells the attendees to take a ten-minute break. 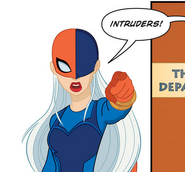