Star Sapphire first appeared in the season 1 webisode Welcome to Super Hero High. She is voiced by Jessica DiCicco in the English version of the cartoon. Her power ring is voiced by Cristina Pucelli.

In Fall Into Super Hero High, she watches Harley Quinn's video with her friends, in which she is shown slipping on Frost's ice with Starfire and also watching as Wonder Woman unsuccessfully completes her flyer's ed obstacle course. She is initially angry with Harley Quinn for uploading the video, but ends up laughing with her friends in good sport.[4]

In Clubbing, Star Sapphire attends the club fair in the school courtyard with Green Lantern, and they later appear attending the Science Club meeting together. When Poison Ivy shows off her latest pet project, she gets attacked by it after petting it.[5]

In Batgirl vs. Supergirl, she makes a cameo appearance in the cafeteria ducking as Batgirl throws Supergirl as they compete over the last piece of Super food cake.

In Doubles Trouble, Star Sapphire spectates the tennis match between Katana and Supergirl against The Flash and Cyborg. In Franken-Ivy, she arrives with hedge clipper constructs with other students to stop Ivy's giant plant from destroying Metropolis, and watches as Katana cuts it down to a more innocuous size.[8]

In Ring of Mire, Star Sapphire, pretends to help clean up a park to look good in front of the camera, but loses her power ring down the drain when she washes her hands. She goes into the sewers to retrieve it where she encounters Killer Croc. After finding her ring, she defeats him and takes a shower upon returning to the school. After getting out, she bumps into Harley, who accidentally drops pies on her, but she replies that she doesn't mind given what she has been through today.[12]

In Hero of the Month: Star Sapphire, she receives the titular award. In her Hero of the Month VT, she replaces the initial publicity photo used with a pre-approved one and receives testimonials from Katana, Bumblebee and Cheetah. In the end, her father arrives to congratulate her, and she asks him for a million dollars to rescue homeless puppies, to which he agrees.[13]

In Roomies Return: Frost's Bite, she finishes the last of the hot tea her roommates prepared before an ill Frost can use the heat to recharge her powers. She later uses all the last of the hot water in the shower before Frost can use it. She then persuades Miss Martian to read Frost's mind to understand why she is so grumpy. After Miss Martian creates steam in the dorm to help Frost, Star Sapphire complains about the heat and storms off after telling her she liked it better when she was grumpy.

In Hero of the Month: Beast Boy, she makes a confessional in Beast Boy's Hero of the Month VT, saying he is a really great friend when not monkeying around. She then appears sad as her friends forgot her quarter-birthday, and Beast Boy gives her a cupcake upon noticing her.

In Fight Flub, she makes a background appearance attending an advanced martial arts class taught by Coach Wildcat, who eventually directs her along with most of the rest of the class to the sparring mats. In It's a Superful Life, she attends the school's winter holiday tree ceremony and uses her ring to create ribbon constructs to decorate the tree.

In Ring Me Maybe Part 1, Star Sapphire appears as one of the students attending Hal Jordan's going away party at Capes & Cowls and later helps defeat Grundy when he crashes the party. Strangely, she does not appear escorting Hal as he leaves for Oa, nor does she remain at Capes & Cowls when Sinestro invades Earth to kidnap SHHS students in the subsequent parts.

In Fish Out of Water Part 2, she makes a background appearance standing in front of the school at night with The Flash and Lady Shiva.

In Ha-Ha Horticulture, she appears sleeping on a bench outside the school with Scorch as a result of an accident involving Ivy's sleeping poppy experiment. After Ivy and Harley distribute pollen across the school to counteract the effects of the poppy, she presumably wakes up.

In Nevermore Part 4, she makes a cameo appearance countering a fire blast from Trigon with Hal as he attacks the school.

In Tamaranean Dance Club Part 2, Star Sapphire appears attending the Tamaranean dance in the school foyer with Korugar students and is among the students ejected out of the school by Bleez and Lobo as "dance" is Tamaranean for "domination battle".

In Mood Ring, Star Sapphire is partnered with Wonder Woman for a phys ed class and cracks her ring, causing its color elements to escape and affect other students and staff at the school, causing them to act in ways consistent with the elements they were hit with. Star Sapphire eventually regains the elements into her ring, and brings the school back to normal by pairing the characters hit with the right emotions together, inspired by Wildcat's words on perfect pairing to make things even.

In Stage Fright, she participates in a school play production of "A Midsummer Night's Dream", but before the performance, she and the other actresses gets stuck to the ground backstage when Raven's good luck spell backfires. The stage manager, Miss Martian then plays all the characters using her shape-shifting ability, with Star Sapphire using her ring to create special effects from backstage. After the performance ends as a success and the spell wears off, she and her friends congratulate Miss Martian, who disappears in shyness.

In Anti Hall Monitor Part 2, she appears as one of the many students trapped in a super-proof room by the monster created by Batgirl's Anti-Hall Monitor App's AI. She and the other students are zapped back into the school foyer after Hawkgirl defeats it.

In Rolling Blunder, she appears lying on the benches of the gym with an ice pack on her head, presumably recovering with Catwoman, Cheetah and Miss Martian from injuries sustained in participating in the school's roller derby team.

In Missing Martian, Star Sapphire appears talking with Catwoman in the school foyer and later in a hallway as Gorilla Grodd announces that it is Miss Martian's birthday on the PA system. Later that night, she attends the surprise birthday party for Miss Martian.

In Super Gift Swap, she attends the SHHS annual gift exchange and immediately takes the gift she brought herself. During the steal, her gift is stolen by Hawkgirl and she steals Batgirl's gift. During the swap, Ivy ends up with her gift and finds out it is empty. Star Sapphire tells her that she spent all her money on wrapping paper so she would not have to buy it next year, to which Ivy replies that she appreciates good recycling.

In the second part of My So-Called Anti-Life, she makes a cameo appearance running for cover in front of the school as Darkseid uses the corrupted amethyst on the school to transform the world in his own image using the Anti-Life equation. In the third part, she is revealed to have transformed into a clone of Darkseid and is turned back when the remaining students reverse the effects of the equation. As Darkseid is defeated, she approaches him with the other students before he retreats. 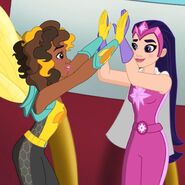