Her friends in danger

Miss Martian
Starfire, born as Koriand'r, is a supporting character in the first generation of the DC Super Hero Girls franchise. She is a Princess of Tamaran and a student at Super Hero High School.

Starfire is a warrior princess from the planet Tamaran, despite her exotic alien beauty, she is a down-to-earth girl. Since arriving on Earth she’s travelled as a part-time fashionista and recently enrolled in Super Hero High. With super-strength, the power of flight the ability to project starbolts, she truly is a SUPER DUPER model.

As a model, Starfire’s seen all the great cities on Earth––and a few that are out of this world! When she’s not in the seat of a luxury jet, she’s flying to meet her besties at Capes & Cowls Café.

She’s got a good heart and tries to say a kind word, but it doesn’t always come out exactly as she means (because of her not understanding Earth grammar). She brings out the best in her friends and when they’re in danger you might get a glimpse of her fiery side.

Starfire is an alien princess from the planet, Tamaran. She has long flowing red and orange hair in a fiery ombré pattern (yellow on the dolls), orange skin, and green eyes. She wears purple eye shadow, purple lipstick, and pink blush. She also wears a purple flame dress with metal shoulder pads with a green gem on the chest, and a metallic belt with another identical green gem. She also wears metallic elbow-length finger-less gloves and purple knee-high boots.

She is friendly, feisty, and a sweet fashionista. She does not understand Earth grammar very well, often using redundancies and overusing the word “the”. The other students describe her as quiet. She’s friends with Cyborg and fellow alien Miss Martian.

In Finals Crisis, Starfire flies through a Super Hero High School hallway as the students are called into the auditorium for the assembly on Semester Finals. She later appears in Poison Ivy's flashback on how she got detention playing Go Fish inside the school with Beast Boy as Ivy's plant Chompy smashes through a wall from outside and scares them away. Starfire then appears cramming for Finals with the Flash and Bumblebee, answering a flashcard question asked by the Flash before asking one to Bumblebee. After hearing a loud noise, she and Flash spring into action, but Bumblebee tells them that it is her stomach before leaving them to get food at Capes & Cowls. Later, after receiving a flyer for Harley Quinn's Finals party, she reminds her that weekday parties are against Principal Waller's rules, but Harley replies that she will not know. Starfire attends the party in Harley's dorm and subsequently appears in the crowd of students surrounding Principal Waller as she congratulates the students for passing Finals.

In Summer Olympus, Starfire declines Wonder Woman's offer to accompany her to Mount Olympus for the summer in favor of spending the summer on her home planet of Tamaran, and flies out a window at Super Hero High with a bag. Later during the summer, a comment by Starfire appears on Harley Quinn's phone expressing interest in hearing about Hawkgirl's summer archeology trip. She also posts a throwback picture of herself and Blackfire, to which Thunder and Lightning agree that Blackfire looks just like her. Starfire later appears returning to Metropolis, having cut her trip to Tamaran short due to missing her friends, while Thunder and Lightning inform her that there are villains heading to Super Hero High School. She does not appear in the battle against Ares and Strife army of brainwashed Olympian Gods, but she does battle Ares and Strife themselves with the other students. When Strife casts a spell on the students to make them fall into infighting, Starfire battles Cyborg, saying she is jealous of his technological suit, while Cyborg comments he hates how her "hair smells like marshmallows". They presumably stop fighting when Wonder Woman breaks the spell and defeats Ares and Strife.

Past Times at Super Hero High

In Past Times at Super Hero High, Starfire makes a cameo appearance walking in a Super Hero High School hallway with Cyborg and Beast Boy as Beast Boy tells them of how he became "king of the dinosaurs" during his field trip to the time of dinosaurs. She comments that he "experienced much amazingness".

In Date with Disaster, Starfire makes a cameo appearance playing at a Hero Ball game representing Super Hero High with Beast Boy and Big Barda as it goes into overtime, while Lady Shiva unsuccessfully attempts to call Barda. 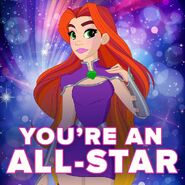 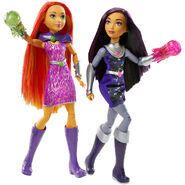 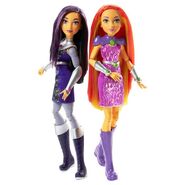 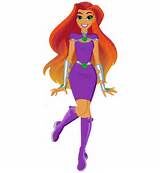 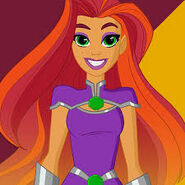 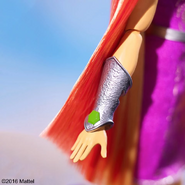 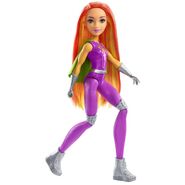