danger, being kidnapped, villains, evil, losing his customers
Steve Trevor is a recurring character in the first generation of the DC Super Hero Girls franchise. He is a waiter at Capes & Cowls Café.

Steve Trevor is a teenage boy who has peach skin, black eyes and blond hair. He wears a grey t-shirt, with a white apron around his waist. He wears blue denim jeans and black and white sneakers, as well as a brown arm-band.

Steve Trevor is voiced by Josh Keaton in the English version of the cartoon.

In Franken-Ivy, Steve Trevor serves a glass of medium whole milk to Poison Ivy and Wonder Woman. When Ivy tells him that she ordered skim milk, he apologizes but gets attacked by Ivy's new pet plant, Franky, prompting Wonder Woman to try to help him. In The Cheetah Who Cried Wolf, he is robbed behind the Café counter by a disguised Harley Quinn in a staged robbery organized by the Cheetah, who pretends to defeat her so that she can win Hero of the Month. When Wonder Woman arrives to confront the robber for messing with Steve, she is revealed to be Harley who tells her that it was the Cheetah's idea. In Hero of the Month: Star Sapphire, he makes a background appearance working behind the Café counter.

In Tales From the Kryptomites Part 2, Steve Trevor uses a mop to keep at bay an infestation of Kryptomites at Capes & Cowls. He thanks the Flash when he quickly disposes of the Kryptomites in the Café in a trash can. A red Krypyomite then appears behind him and uses its anger-inducing powers on him, causing him to swing his mop angrily, knocking objects, saying that working there makes him angry. In Around Metropolis in 80 Seconds, he makes a cameo appearance whistling and sweeping outside the café as Wonder Woman blows past him on her motorcycle during her street race with Supergirl and Harley Quinn, frizzing his hair and surprising him. He comments that she "really blows [him] away". In Fresh Ares Part 1, he works at the Cafe again, serving Catwoman a large milk to go. As she drops it, he cleans up the mess and offers to get her a new one as she runs off. Later, he listens to Ares' joke along with Starfire and Frost as Catwoman returns to the Café to drop a pollen grenade to disorient Steve and the patrons and steal Ares' Amulet of Harmonia. After it is stolen, Steve, Frost and Starfire exit the building as Ares turns into a giant, smashing through the roof and leaving the café to start a rampage over having the Amulet stolen. In Dog Day After School, Steve hides behind the café counter as a white blur rampages through the restaurant. After it leaves, he tells Supergirl and her friends that he could not identify the blur and points her and her friends to the alley behind the café when Hawkgirl asks him where it went.

In Ring Me Maybe Part 1 Steve Trevor makes a cameo appearance working at the café during Hal Jordan's going-away party as Solomon Grundy enters the café to seek revenge on Hal and gets attracted to the Super Food cake on the counter. In Nevermore Part 1, he appears drying a glass at the café as Supergirl flies into the café, surprising him. In Tamaranean Dance Club Part 2, he offers to dance with Wonder Woman as she eats in the cafe with Supergirl, Katana and Starfire. Wonder Woman accepts, believing he means dance in a Tamaranean sense which means domination battle, confusing him. After Katana tells her he means dance in a conventional way, they slow dance together under a spotlight in the café.

In Finals Crisis, Steve Trevor appears working at Capes and Cowls Café as it is being robbed of tuna sandwiches by Killer Croc. After Bumblebee defeats him, she orders a honey smoothie from the café, to which Steve tells her that he can't give her one as the smoothie machine is broken. After Bumblebee returns to the café with a tool and fixes the machine, he gives her a smoothie on the house. Later, Giganta goes on a rampage after taking the wrong order at the café. Steve runs out of the café to give her the right one, but she lifts him off the ground and rages about telling her she did wrong. Wonder Woman catches him after Giganta drops him, and he thanks her for saving him. After Giganta is defeated by Wonder Woman and her friends after running to Centennial Park, Steve arrives with Lois Lane and Commissioner Gordon. Earlier in the day, Steve also appears inspecting the broken smoothie machine as the noises it makes distract Batgirl from studying for Semester Finals, prompting her to leave.

In Hits and Myths, Steve stands outside the café holding a breakfast muffin and counting down on his watch. As it reaches one, Wonder Woman flies by on her way to school and picks up the muffin with her Lasso of Truth, prompting him to remark that she is "right on time", as she thanks him for the muffin. He later appears working behind the counter at the Café as Miss Martian, Supergirl and Beast Boy question Lady Shiva inside about the missing Batplane.

In Summer Olympus, Steve appears raking outside the café, and salutes Wonder Woman and her friends as they run by. They do not reply, and blow up leaves around him. Later during summer break, he gives a coupon to Catwoman for a free drink when Frost, who is working at the Café for the summer accidentally freezes her glass of milk. When Steve suggests that she only work on drinks that are supposed to be frozen, she tells him that she does not think the job is working out, but their conversation abruptly ends when she creates an ice shield to save them both from an arrow shot at them by Apollo. She then tosses to him her apron and quits to save the day.

Steve is friendly, out-going, supportive waiter who is kind to all customers alike, especially the superhero girls and Wonder Woman. Despite being supportive, Steve is also defenseless when being attacked by villains and gets easily scared when confronted by one of the villain; Although, Steve in other DC universe is never scared of any villains he faces but brave and smart-mouthed when it comes of facing evil. Steve also has a crush on Wonder Woman and the two of them end up dancing together at the cafe 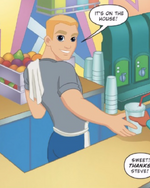 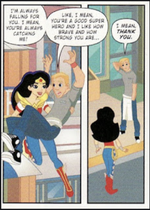 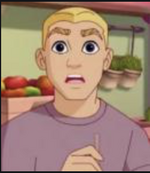 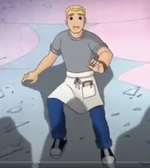 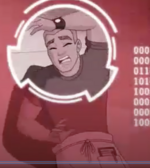 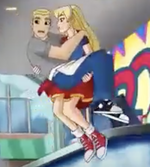 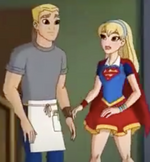 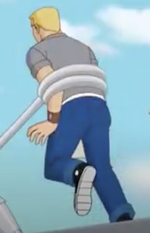 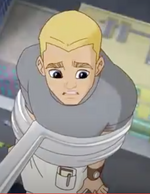 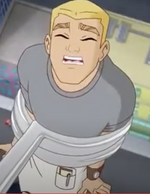 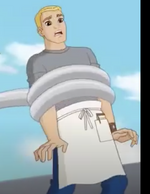 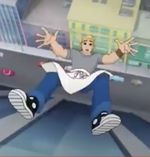 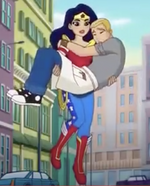 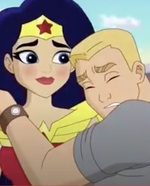