DC Super Hero Girls Wikia
Register
Don't have an account?
Sign In
Advertisement
in: A to Z, Characters, Teenagers,
and 6 more

turtle
The Flash, real name Barry Allen[1], is a recurring character in the first generation of the DC Super Hero Girls franchise. He is a student at Super Hero High School.

The Flash has blonde hair, blue eyes and light white skin. He wears a red hoodie with a red and yellow color scheme and it has the signature Flash logo on the front as well as lightning bolt decoration round the sides.

He is voiced by Josh Keaton in the English version of the cartoon.

In Welcome to Super Hero High, the Flash appears in the crowd by Principal Waller as she introduces the school for a promotional video.[2][3] He is later shown getting outrun by the Cheetah.[2] In All About Super Hero High, he appears in the video as it is being played on Wonder Woman's phone and subsequently appears talking to Cyborg outside the school as she first arrives. He is later seen in the school hallway with Doctor Light and walking through the halls by himself.[3]

In Crazy Quiltin', he makes a background appearance attending a supersuit design class.[4] In Fall Into Super Hero High, he appears with Beast Boy and Hal Jordan complimenting Harley Quinn's video that she uploaded online.[5]

In Clubbing, The Flash appears at the Science club booth at the SHHS club fair with Frost, where they recruit Poison Ivy. They later appears at the club meeting.[6]

In New Beginnings, the Flash makes a background appearance attending the surprise party for Wonder Woman for defeating her first super villain, where he stands by Frost. In the special Super Hero High, TBA[8][9]

In Doubles Trouble, he and Cyborg compete against Katana and Supergirl in a tennis match, using his super speed. By the end of the episode, they are revealed to have won, and he and Cyborg accompany Katana as she gives Supergirl the Acey trophy after catching the Double Dare Twins. In Franken-Ivy, he makes a background appearance standing by Vibe in the SHHS hallway.

In The Ring of Mire, he makes a background appearance talking to Frost by the Lady Justice statue in front of the school. In Riddle of the Heart, he, Hawkgirl and Batgirl round cats at night in Metropolis, and find a riddle which sends them to save a citizen at the clock tower. They then find another riddle sending them to Centennial Park, where he and Hawkgirl get caught in a net. Hawkgirl tells Batgirl to catch the perp rather than free them.

In Roomies Return: Frost's Bite, he is among the students reading in Frost's dorm and who accidentally destroy her heater when responding to a save the day alarm. In retaliation, she freezes them. In Hero of the Month: Lady Shiva, he appears in Lady Shiva's Hero of the Month VT, mentioning that they both like numbers and sometimes like them together. They then appear together at a chalkboard calculating the "perfect punch".

In Surprise!, the Flash makes a cameo appearance talking to Frost by the Lady Justice statue in front of the school.

In Tales From the Kryptomites Part 2, he and other students respond to a Save the Day alarm to manage a Kryptomite infestation in Metropolis, where he shatters several with his speed. He joins Batgirl at Capes & Cowls Café where he catches the Kryptomites in the Café in a trash can and later cheers with the other students and citizens as Cyborg disposes the last of the defeated Kryptomites. In Seeing Red, he appears getting lifted into the air in a school hallway by Hawkgirl who gives him three weeks detention, retorting "make it four", due to the activities of a red, anger inducing kryptomite roaming in the school. After Starfire defeats it, they are seen making up.

In Spring Prison Break, he makes a background appearance listening to Frost's spring break essay. In Around Metropolis in 80 Seconds, he attends Wonder Woman and Supergirl's motorcycle street race, commenting that he loves a good race and knocks into Wonder Woman's invisible bike.

In Fresh Ares Part 1, he makes a cameo appearance at Capes & Cowls standing at a table with Bumblebee. He does not appear in the café when Catwoman sets off a pollen grenade in the café to steal Ares' Amulet of Harmonia, causing him to go on a rampage. In Fresh Ares Part 2, he saves what he can from Batgirl's collapsing bunker due to Ares' rampage, before joining her in the Battywagon to battle Ares. When the battle knocks over a building, he evacuates the people inside as Frost tries to keep it from collapsing. After Ares is defeated, he cheers with the other students. In Fresh Ares Part 3, Ares breaks free and knocks over another building, and the Flash again evacuates the people inside. He races ahead to Catwoman's vault before Batgirl and Miss Martian when the latter finds it there with her psionic powers. Upon obtaining it, he races to give it to Wonder Woman before Catwoman offers to return it to Ares. He gets knocked back when Ares blasts fire at him and other students and Frost's ice shield shatters. After Catwoman returns the amulet and stops Ares' rampage, he stands by Batgirl and Miss Martian as Catwoman unsuccessfully tries to steal the Battywagon.

In Gorilla Warfare, he attends a phys ed class where Gorilla Grodd gets abducted by members of his former gorilla army. He and the other students pursue them into the school foyer and battle them, where he defeats one by running around him until he collapses from dizziness. After Grodd tells the gorillas that he is not brainwashed and at the school by choice, he gives Flash and the other students detention for staring. In Fight Flub, he makes a background appearance attending an advanced martial arts class, and is directed with most of the other students to the sparring mats. In It's a Superful Life, he helps a man decorate his house for the winter holidays and later attends the SHHS winter holiday tree ceremony in the school foyer.

In Ha-Ha Horticulture, he appears standing outside the school and subsequently sleeping on a park bench after Poison Ivy's sleeping poppy experiment makes almost the entire school fall asleep. He also appears when Ivy and Harley Quinn distribute pollen across the school to reverse the effects of the poppy. In Tamaranean Dance Club Part 1, he appears as Supergirl's partner during their dance seminar with Crazy Quilt. During the spin, Supergirl spins him so fast that he drills into the stage floor. He later appears attending the dance in the school foyer. He does not appear in Tamaranean Dance Club Part 2, either participating in the battle against the Korugar students as "dance" is a Tamaranean for "domination battle" or being captured and ejected from the school with the other students. In By the Yearbook, he makes a cameo appearance looking at a completed SHHS yearbook with Hal Jordan in the hallway.

In the first part of All Pets Are Off, he enters his pet turtle Whazit in the SHHS pet show, who wins an award for best pet personality. Whazit and the other pets are then kidnapped by Artemiz and brought away in the Battywagon who plans to bring them to Apokolips to join Granny Goodness's Animal Army. In the second part, after the pets rescue themselves and defeat Artemiz, Flash and the other owners reunite with their pets, who split the pet show's Grand Prize.

In Missing Martian, he appears in the school hallway hearing Vice Principal Grodd announce that it is Miss Martian's birthday through the PA system and later appears in the cafeteria. In the first part of Fortress of Solidarity, he appears attending the SHHS winter holiday tree ceremony and watches as Trigon arrives.

In the third part of My So-Called Anti-Life, he appears as a clone of Darkseid turning back into himself after Darkseid's Anti-Life equation to remake the world in his image is reversed, and later approaches Darkseid after he is defeated with other students before he retreats.

In Finals Crisis, the Flash makes a cameo appearance walking in a Super Hero High School hallway hallway as the students are summoned into the auditorium for the assembly on Semester Finals the next day. He later appears sitting in detention. He studies for Semester Finals with Starfire and Bumblebee using flashcards, where Bumblebee leaves their study session to get food. He later appears attending Harley Quinn's Finals party. After Finals, he appears in the crowd of students surrounding Principal Waller as she congratulates the students for passing Finals. 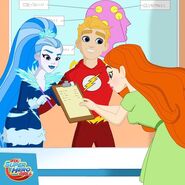 "Hero of the Month: Wonder Woman"