DC Super Hero Girls Wikia
Register
Don't have an account?
Sign In
Advertisement
in: Article stubs, A to Z, Characters,
and 8 more

317 in Amazonian years, equivalent to 17 in human years

Garnet Red
Wonder Girl is one of the main characters of the series Super Best Friends Forever. She is Wonder Woman's younger sister and best friends with Batgirl and Supergirl.

She is the only mature one in the group. She believes in bringing justice to the world and looks up to her big sister, Wonder Woman. She refuses to do anything that could be considered unjust from her perspective, but can be convinced to do "mischievous" things if she thinks it will turn out being the right thing to do in the end, also by Batgirl and Supergirl's puppy dog faces. She is slightly intimidated by her older sister, but respects her greatly. She often starts rambling about honesty, bravery, and "What it means to be an Amazon." She is known to go out into what looks like a garden sanctum belonging to her and her sister and talk to the marble Athena statue. Her friends, especially Supergirl, tend to find this a little funny and ridiculous. She stands firm to her beliefs and always makes sure to stay true to her word.

She has long dark brown hair and dark brown eyes. She had very thin limbs and a very thin waist. While Supergirl and Batgirl have very rounded shoulders, arms, and figures, Wonder Girl's is very angular. She is also the tallest of the group. She wears a full red jump suit with yellow stars lined up at the sides, with a V-neck and straps. She wears a golden belt made up of smaller strips with a capitol W at the center. She also wears giant gold stars as earrings, black knee-high boot, and silver wrist cuffs. She has fairly thick eyebrows, a straight nose, and an angular jaw. She speaks with a slight Greek accent.

While this version of Wonder Girl is Wonder Woman's sister and likely based on pre-New 52 Donna Troy, she has New 52 Donna Troy's brown eyes (despite the promotional material shows her with greyish purple eyes). 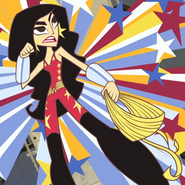