317 (via her Amazon immortality)

To save the world of man with her friends

Being a hero, Her friends, Training with Tatsu, Sweets (Most of all, Death by Chocolate) , Greece, Steve Trevor (Love Intrest), Her Heart Being Warmed, Rock (Possible in Hard Rock), Having fun, Training her friends

Not being a hero, Harleen shocking her, Karen upset, Babs farting, Powergirl, Teddy Bears, Being called Girl losing her bracelets, Antiope going to far, Her mom not letting her be free

Diana Prince (also known as Wonder Woman) is one of the main characters of the DC Super Hero Girls television series. She is voiced by her same voiced actress from the Web Series, Grey Griffin. She attends as a student at Metropolis High School.

Wonder Woman is an Amazon princess from the island of Themyscira and the daughter of Queen Hippolyta.

She is the team's leader. As a hero she is Wonder Woman; as a student, she is Diana Prince.

Whenever she is around Steve, she is so cute, adorable, shy, and clumsy (That mostly happens because she is in love with him). Besides that she is heroic, caring for her friends, but like her mother and Supergirl, she has a short temper, for example, when she took a deep breathe when she met Harleen. She has leadership skills. Diana has a good heart and will always try to save people. She only squeals when she gets to be a hero and get a second chance for a driving license. She works hard at everything she does. She used to love having fun with Antiope, but now likes studying thanks to her mother

Wonder Woman is shown to be the tallest of the group (mostly due to the fact she's an Amazon) with long dark-blue hair in the form of a ponytail with a golden headband. As Diana Prince, her attire is a red-ish sleeved shirt with a white undershirt, blue skirt, long white socks, and red shoes.

As Wonder Woman, she wears a golden tiara with a red star, red armor with a golden W on the top, and blue skirt with stars on each side. 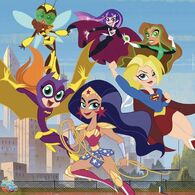 Retrieved from "https://dcsuperherogirls.fandom.com/wiki/Wonder_Woman_(G2)?oldid=47921"
Community content is available under CC-BY-SA unless otherwise noted.