16
Zatanna Zee Zatara also known as Zatanna is one of the main characters in the DC Super Hero Girls. She is voiced by Kari Wahlgren.

Zee is a stickler for rules. Zatanna could, but not always be bragging about herself, but really she is a good, helpful, and loyal friend. She gets angry when nobody likes her magic acts.

Zee's very first paid performance as a solo magician is depicted in the episode "Adventures in Bunnysitting". She performs magic at a children’s birthday party in front of a crowd of three children at a park. The performance is interrupted when the spawn of the magical bunnies floods the park. At first Zee and Kara, who was supposed to watch the bunnies and keep them apart, sweep the spawn into Zee's top hat and make them disappear, but more and more keep flooding in. Zee casts a hate spell, but this turns the flood of bunny spawn into a giant bunny monster made up of individual bunny spawn. Kara is eaten by the giant bunny monster but flies out with the two magical bunnies in her hands and breaks the bunnies from their embrace, making all their spawn disappear. 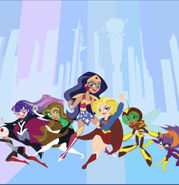 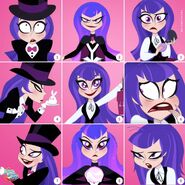 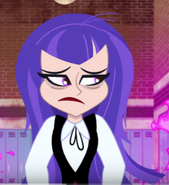 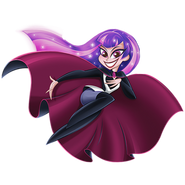 Add a photo to this gallery
Retrieved from "https://dcsuperherogirls.fandom.com/wiki/Zatanna?oldid=28671"
Community content is available under CC-BY-SA unless otherwise noted.